The Lifetime Allowance (LTA) was introduced in April 2006 and put a cap on lifetime pension savings after which an LTA tax charge would become payable. 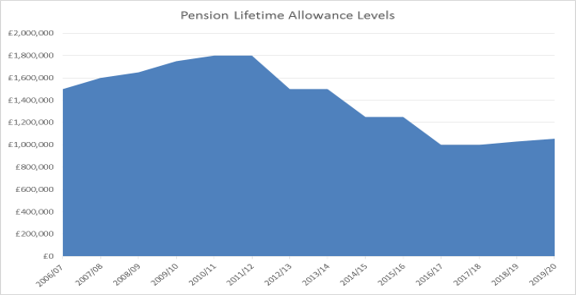 The latest figures available from HMRC show that the LTA tax take has increased by more than 2,000% in the last ten years, to over £102 million. With buoyant markets over the last few years, it is a growing source of revenue for HMRC and more and more people are being caught by the tax.

The reduction in LTA means that more people will, obviously, be caught by the limit. Secondly, as the LTA is only increasing with CPI, more people will ‘sleepwalk’ into having an LTA issue as, historically, pension funds and salaries have grown faster than CPI. It’s quite a ‘clever’ taxation strategy that will catch many people unaware!

How is the LTA calculated?

Calculating the LTA is quite simple where there is a defined contribution scheme. It’s simply the pension investment fund value (generally unit price multiplied by the number of units).

Defined benefit schemes have caused more of an issue. The ‘equivalent’ fund size is the annual pension payable multiplied by 20, plus any lump sum that is payable in addition.

Pensions taken before April 2006 are valued by multiplying the pension payable by 25.

If you have a mixture of pension types, then you need to add them all up to work out your LTA position.

Some of you will be aware of the current issue that the government is trying to resolve. This has been highlighted by doctors in the NHS pension scheme who have hit their LTA limit and now see no point in working extra shifts because of the various tax implications involved. These tax implications not only relate to LTA taxation but on the input limits into pensions (Annual Allowance tax charges).

When is the pension fund tested?

Whenever pension benefits are taken, a percentage of your LTA is used. This is called a Benefit Crystallisation Event (BCE) and, just in case you thought this seemed simple, HMRC have listed 13 events that qualify as BCEs.

Not drawing benefits from a pension won’t mean that you can escape the LTA test. This is because there is a final ‘wash-up’ calculation at age 75, when everything has to be declared and ‘crystallised’ and ‘uncrystallised’ pensions are added together for the test.

Even if you die before taking benefits, then that’s another specified BCE, so you will still be tested post-mortem. Care is needed here too, because some life cover associated with pension schemes (mainly employer schemes) may also be included in the calculation.

Taxation if over the LTA

If, at the time of testing, you exceed the LTA then the options are:

In some cases, ‘protection’ is available for those with higher fund sizes than the current LTA.

This is aimed to allow those who have funded for larger pensions (and possibly tax-free cash) prior to the LTA rules being introduced not to be penalised. Some people will still be eligible to claim LTA protection now depending on their circumstances.

The rules are complicated, adding some irony to the widely publicised ‘Pension Simplification Rules’ that were introduced at the same time as the LTA legislation back in 2006.

The LTA and divorce

The example below highlights one of the issues that can arise although, depending on the case, a myriad of issues can become present where larger funds exist. The simple answer is to seek advice before instructing a pension sharing report. This can help to give direction on action necessary, questions to ask and how the letter of instruction should be worded.

Even more important can be how the case is implemented so that LTA protection can be maximised.  In both cases, the advice of a Pensions on Divorce Expert (PODE) should be sought (see the latest Pension Advisory Group report for guidance on what a PODE is).

Let’s take a case where Husband (H) is a high earner, in a large private sector company, which still runs a defined benefit scheme. He is approaching retirement and is getting divorced from his Wife (W). He has a preserved pension of £80,000 per annum, which will come into payment at age 60. The Cash Equivalent Value (CEV) is £2.5 million.

However, W will have a defined contribution fund of £1.25 million, well in excess of the current LTA limit, and thus she will suffer a LTA charge.

If equality of income is sought, the situation becomes slightly worse for W. A Pension Sharing Order (PSO) of around 52% may be required, generating a pension credit in favour of W of £1.3 million. This will leave both parties with a projected gross income of £38,800 per annum each.

H has no tax to worry about, other than income tax. However, W has to consider LTA as well as income tax. If we take LTA into account and seek to equalise incomes after LTA tax is deducted, then an even greater PSO is required to compensate W for the LTA tax she will suffer (not suffered by H).  There is a circular issue here…!

What can be done?

As mentioned earlier, the number of people who are being affected by the LTA tax charge is on the increase.

We have found that some Pension Sharing Reports do not give recognition to the LTA tax charge in establishing equality of income which, to us, seems inappropriate. In some cases, providing guidance as to how an LTA charge can be reduced or eliminated requires individual financial advice which only a regulated pension adviser could provide but which an actuary cannot.

In the above case, there is a possibility that W could apply for Fixed Protection 2016 which would fix her LTA at £1.25 million.

As an alternative, a combination of pension sharing and offsetting can create satisfactory outcomes and serve to reduce or eliminate LTA charges. Here, W would forego a pension share in exchange for cash or an alternative non-pension asset (e.g. equity in the home). Clearly, pension incomes would not be equalised, but the cash offset would compensate for this, providing there are sufficient assets available.

The LTA legislation is a complex area and family lawyers should be sensitive to cases where LTA issues may be present.

To make matters confusing, some of these issues will not be immediately apparent at first glance.  Additional questions need to be asked regarding pension contribution histories, whether LTA Protection Certificate(s) exist and past BCE events.

Some of this ‘investigation work’ could be done by a regulated adviser, as will any guidance on the issues to ensure that financial advice is not inadvertently provided.

Additionally, and not discussed above, Annual Allowance issues may also exist which may prevent the rebuilding of a pension fund once shared. Again, this is an area where financial advice is needed.  A topic for another day!

If you have clients who may experience issues regarding the LTA, it can pay to take financial advice. We can help. Email info@blueskyifas.co.uk or call us on 0118 987 6655.