Back in October, you may have missed that the Queen declined the “Oldie of the Year” award.

Each year, The Oldie magazine celebrates the achievements of the older generation, with former winners including veteran athletes, and well-known figures such as the late actress Dame Olivia de Havilland and the artist David Hockney.

Despite Her Majesty’s late husband, the Duke of Edinburgh, winning the award in 2011, the Queen declined the award, saying “you are only as old as you feel”.

With more and more people living long and healthy lives, it’s vital that you take your longevity into account when planning for your retirement. Here’s why.

You’re likely to live longer than you might expect

According to the “QI elves” – the team behind the popular TV show – the average London pigeon has 1.6 feet. So, if a pigeon has two feet, it actually has more feet than the average.

Statistics can throw up these strange anomalies, and it’s important to understand facts and figures – particularly when it comes to your finances. 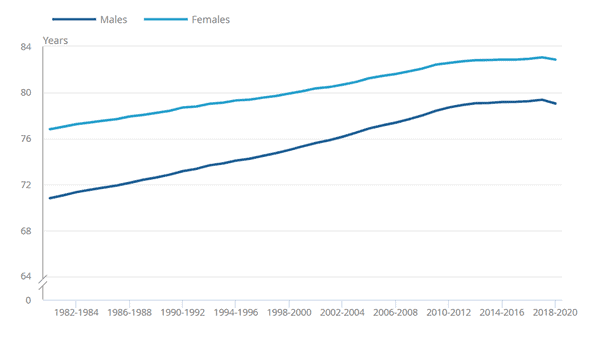 While life expectancy has been steadily rising over the last 40 years, if you’re a man and you plan so your pension lasts you until age 79, or you’re a woman and you plan to age 83, you’re likely to significantly underestimate your longevity. This is because of the way these statistics are calculated.

According to the ONS, the number of octogenarians and those over the age of 65 is increasing rapidly. The official data states that:

If you’ve already reached retirement age, your life expectancy is higher than the average. You haven’t died in childbirth, or an accident in your working life.

Furthermore, the most recent data shows that UK life expectancy at age 90 years was 4 years for males and 4.6 years for females.

What all this means is that, if you’re planning your retirement, it’s important to consider that your resources may have to last you 20, 30 or even 40 years, depending on your health and the age you stop working.

Your priorities will change as you get older

The first thing to consider is that your spending patterns will likely change through your retirement.

In the early years, you may spend money on travel, hobbies and all the things you had looked forward to during your working life. You’re likely to be in better health and have a “bucket list” to tick off.

As you get older, you may spend more on things like later-life care and less on travel and eating out.

When you retire there are lots of moving parts to consider. You want to ensure you have enough income to live the lifestyle you want – and that income may change over the years.

Our approach to this is to use sophisticated cashflow modelling. We can look at all your assets and liabilities, and plans for the future, and work out whether you have “enough”. We can model a range of “what if?” scenarios based on high inflation rates and market volatility to ensure that you won’t run out of money in even the worst-case scenario.

And, of course, we can plan for a long life. So, when you’re a future winner of “Oldie of the Year” you’ll still be comfortably off.