As pensions on divorce experts, we’ve spent the last 20 years trying to ensure our clients get a fair split of assets when they separate. Now, a major new piece of research has highlighted the need to reform divorce settlements to better share pension wealth.

Based on official data, the study by the University of Manchester has revealed huge gaps in the value of pensions between divorcing men and women.

Read on to find out more about the study, and the key issues facing couples when they split.

In 2000, the law changed to allow pensions to be shared on divorce. This was primarily to tackle concerns about the low income levels of older divorced women, with the aspiration that a “sharing” approach would be taken in every case.

Now, while there are approximately 100,000 divorces each year in England and Wales, figures suggest as few as 12% involve any sort of pension sharing. Since pension shares can only be achieved with a court order, it’s possible to see how few cases result in a split of pension assets.

The University of Manchester research has revealed what many experts knew to be true: namely that men have substantially more private pension wealth than women. 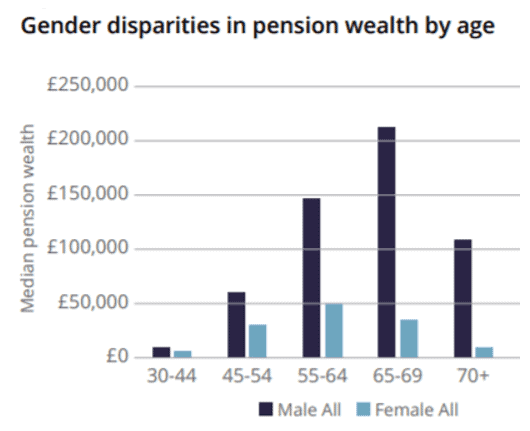 Source: The University of Manchester

The research also found that divorced women’s pensions are much lower than their male equivalents. Divorced women not cohabiting in their late 60s have less than 30% of the pension of equivalent men.

Many women are reliant on pension income from a partner

The University of Manchester study found that divorced women’s pensions are “worryingly low”.

They believe that the issue is compounded by the fact that divorced women with dependent children, even if employed, remain less likely to be contributing to a pension.

As many people (primarily women) may become reliant on pension income from a partner for their economic welling in retirement, there remains considerable potential for pension sharing when it comes to divorce. The study concludes this “could have [a] substantial impact on women’s finances in later life”.

Another issue that contributes to the issue is the fact that women will often prefer to take a share of any assets in the form of property – typically the family home – then in pension assets.

We often find that any trade-offs between a property and a pension may not always be balanced. Comparing the future value of both can be difficult, and pension wealth can often exceed property wealth for more pension wealthy couples, especially outside London.

Debora Price, co-author of the report and professor of social gerontology at the University of Manchester, told the Guardian: “Divorce is a very emotional time for couples. It is especially difficult for them to think about pensions and often, the person with the larger pension – almost always the husband – does not want their pension to be shared as an asset in divorce.

“Women are often very focused on keeping their homes for themselves and the children and are often prepared to give up quite a lot to secure that.

“Pensions are also complex and horrible to think about, and if you do think about them, you very often end up needing to pay legal and financial advisers to give you advice, which people don’t want to do. This creates a lot of pressure to ignore the pensions.”

We have seen many instances in the past whereby husbands (in particular those who have large defined benefit public sector pensions, such as police or armed forces) have sought to reach agreement without recourse to an expert’s report. Often the proposed settlement significantly undervalues the benefits to be provided by the pension scheme.

Research has shown that men have very emotional attachments to their pensions and that solicitors are often instructed by the women they are acting for to ignore pension wealth because the emotional and personal costs are too high.

“Women often see the house v the pension as a trade-off, but they do this in many cases without even finding out what the pension is worth and also without thinking about how they are going to live in later life,” says Tim Pike, head of modelling at the Pensions Policy Institute.

This is where we believe that engagement with a divorce specialist financial planner can add significant benefits. Through use of our cashflow modelling software we can demonstrate in a very visual way how the settlement might work in practical terms. Removing fear and giving confidence is at the heart of the work that we do for our divorcing clients.

The report shines a light on the current discrepancies between the genders when it comes to pension wealth.

Overall, the University of Manchester research concludes that poor pension outcomes for divorced women provide little support for any suggestion that pensions are being shared after divorce.

However, the analysis shows that there remains considerable potential for pension sharing within couples.

With the new flexibilities that pensions can provide they can often be the key to creating a great outcome for both parties. We have gained significant experience over the years helping our clients to settle into their new life with great confidence.

If you have clients who need advice on how to split their pensions on divorce, we can help. Email info@blueskyifas.co.uk or call us on 0118 987 6655.